Sursky cromlech - the observatory of Arians.

In Ukraine close to the city of Dnipro, the majestic Eneolithic mound has been excavated.  Its age is 5 - 5.5 thousand years. The New York Times told about the reasons for the liquidation of the monument and about Ukrainian organization The Guardians of Mounds which call for the preservation of the Sursky Mound.  Two dozen burials and a circle of stones were found in a high grave. Journalists and archaeologists, unaware of what they had found, called it "Ukrainian Stonehenge." The guardians of the mounds have solved a puzzle that is 5 thousand years old.

At the dawn of the “mound culture”, a Yamna archeological culture lived within the Dnieper rapids, which gave impetus to the creation of the Indo-European community and determined the ethnogenetic map of Eurasia for the next thousands of years. The people of the Yamna culture had a simple way of life but an extremely rich imagination and ingenuity. Their language, myths, and beliefs became the basis on which kingdoms, empires, and religious teachings arose later. Aryans, as they called themselves, spread around the world, but left their mark on modern Ukrainians, the Ukrainian language and tens of thousands of graves in the land now called Ukraine.

The burial of their relatives was arranged in pits, the body was sprinkled with red ocher and a mound was poured over the grave. Sometimes stone blocks were installed vertically in a circle in the mound. We call them cromlechs. In the area of the Dnieper rapids, cromlechs were found in mounds near the villages of Baburka, Kichkas, Tomakivka and Novooleksandrivka. 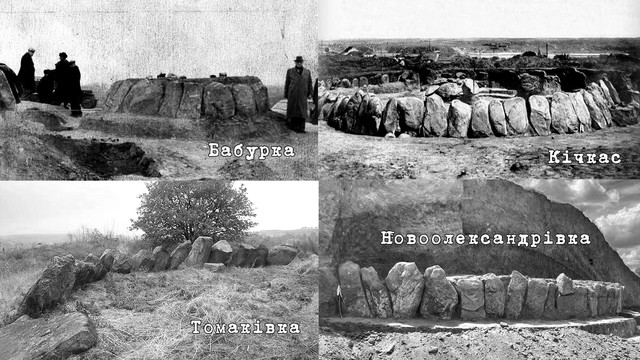 About 60 stones of the cromlech of the Sursky mound in Novooleksandrivka are lined up in a circle with a diameter of 18.5 m along the outer radius. There are no stones in several places of the cromlech, which forms passages and divides the circle into four sectors. The northern sector consists of 33 stones, three other sectors: southwestern, southern and southeastern consist of 9 stones each. Researchers claim that the missing stones were removed from the circle after its construction. However, they are removed only in those places where the azimuths coincide with the azimuths of the mounds in the vicinity. If you stand in the center of the circle, then through the passages in it you can see other mounds. A very important part of the cromlech is the passage directed to the southwest. The passage is the largest of the others and is distinguished by the highest blocks. Due to a gap in the stone circle at a distance of two and a half kilometers from it you can see the mound, which is still preserved on the outskirts of the village of Novooleksandrivka. The center of the circle, the southwest passage and the mound stand on the same line, which has an azimuth of 227.5 degrees, where the sun set over the horizon 5,000 years ago on the day of the winter solstice. After this point, the day begins to grow, a new solar cycle begins. This astronomical event was important in all cultures, so its occurrence was identified by the builders of the Sursky cromlech. Three other passages are directed to the mounds W2, SE1, E2, standing at azimuths of 156, 98 and 279 degrees. 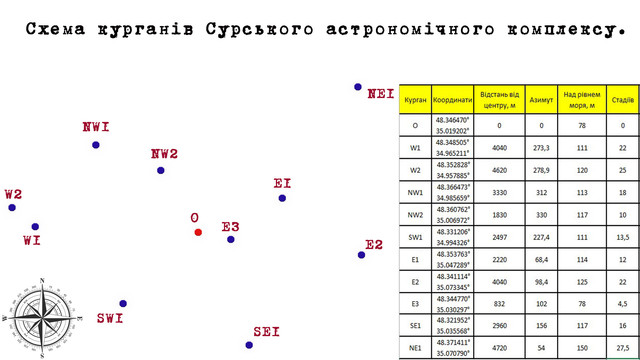 The mounds around the cromlech are placed not accidentally and not chaotically. The location of each ancient tomb can be explained in several ways: astronomical and mathematical. Some mounds are standing on the points of rise or set of celestial bodies on the days of astronomically important events.

Vizier SW1 marks the sunset on the day of the winter solstice at an azimuth of 227.5 degrees. It is worth noting that now the sun sets on December 22 in a slightly different place. On this day, the solar disk with its lower edge touches the horizon at an azimuth of 228.5 degrees. Over 5,000 years, the solstice has shifted in the sky by almost one degree due to the oscillating movements of the earth's axis, which is called nutation. The astronomical method of determining the age of the complex by the method of the famous British astroarchaeologist Norman Lockyer gives a result that coincides with the dating of the burials of the Yamna culture in it. In the west there is the vizier W1, which marks the set of the Sun on the equinox. Mound- vizier NE1 marks the sunrise on the day of the summer solstice. Some mounds mark the points of rise and set of the full moon closest to the dates of the solstice, the so-called "high" and "low moon". The location of some mounds, such as those with azimuths of 98, 156, 330, 280 degrees, cannot yet be explained astronomically, but they logically fit into the overall picture of the complex. Mathematical proportions match the distances between the mounds.

All measurements are made from the center of the mound. In the ratio of the distances between the mounds we have simple mathematical proportions.

The distances between the center and the western and eastern visors are the same. The error of all measurements does not exceed the diameter of the mound (20 - 30 m), which may be due to the error of the software or the creators of the complex. 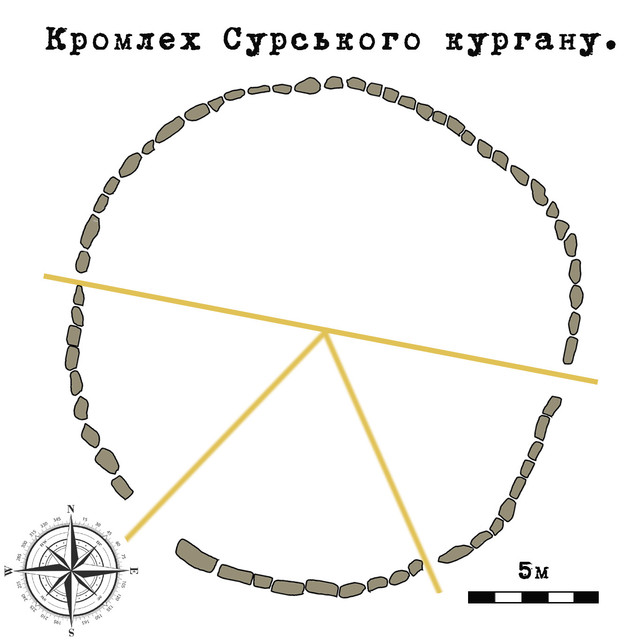 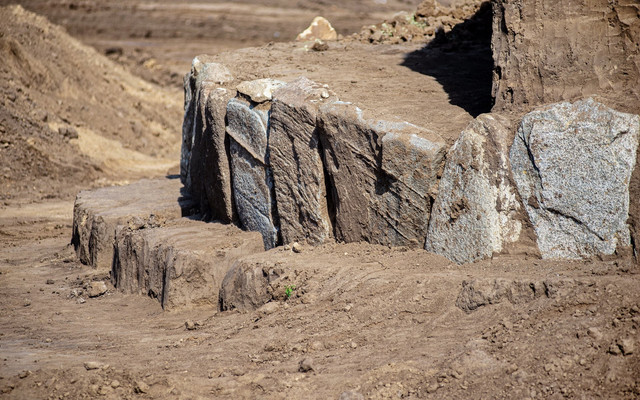 Unexpected and unbelievable was the fact that the distances to all the mounds can be measured by the ancient length. It is known as stadium. See the table above. Only two distances have numbers and a half, the remaining distances can be divided by the length of the stage (185 m) and get an integer. In addition, the diameter of the cromlech is 18.5 m and there is a 1/10 stage. This ancient measure of length is also present in the geometry of the Bezvodivka Observatory. Most distances to the mounds have an integer number of stages. You can read more in the article Cosmic geometry. Another significant coincidence with Bezvodivka is that the distance between Sursky mound and the eastern vizier E3 is 832 m. In Bezvodivka the distance between the center of the complex and the western distant vizier W1 is 832 m. also. The other distances of these two observatories are the same: 832, 1830, 2960, 3330 m. 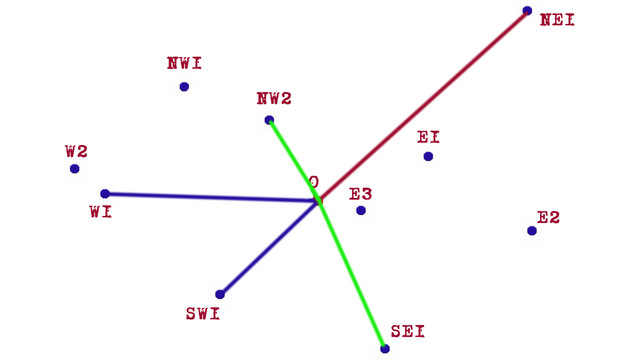 There is much in common between these two ancient observatories, but there is one big difference - between them – the distance is more than three hundred kilometers. The conclusion is that there were certain standards in the construction of such cult-astronomical complexes. Sursky mound is lost, excavations destroyed it. Fortunately, we have a few more mounds of the complex that have left.